In the immediate aftermath of the earth-shattering Brexit vote, it all seemed strangely quiet in the markets.

The huge spike in volatility we saw at the time of the vote has dwindled away to almost nothing.

There have been no devastating crashes. Most of the major currency pairs have traded sideways in pretty tight ranges. And the FTSE100 is actually back HIGHER than it was before the referendum.

It was obviously the market that the media made a big meal of when it opened on Friday 24th June.

There had been a huge ‘gap open’ to the downside (that’s where a market opens much lower than it closed the day before – usually caused by some geopolitical event like the Brexit vote hitting the newswires while the market is closed!). So you’d have seen the typical doom and gloom headlines in the news that morning.

But this index of the top 100 companies traded at the London Stock Exchange actually includes huge multinational corporations. It’s not really a true reflection of the underlying UK economy at all.

Sure, there are some companies in there that mainly do business in the UK – housing developers like Barratt’s for example. But let’s have a look at the top 5 companies in terms of market capitalisation i.e. the ones that can make the index move most.

They’re all massive global corporations who arguably carry out the bulk of their operations overseas.

And that’s why the smart money could load up on cheap investments on Friday 24th because of the knee-jerk panic reaction.  And they did so for days after too. They were able to fill their barrows with premium shares at a huge discount in some cases.

The FTSE100 exploded almost vertically. It looked like this on the daily chart: 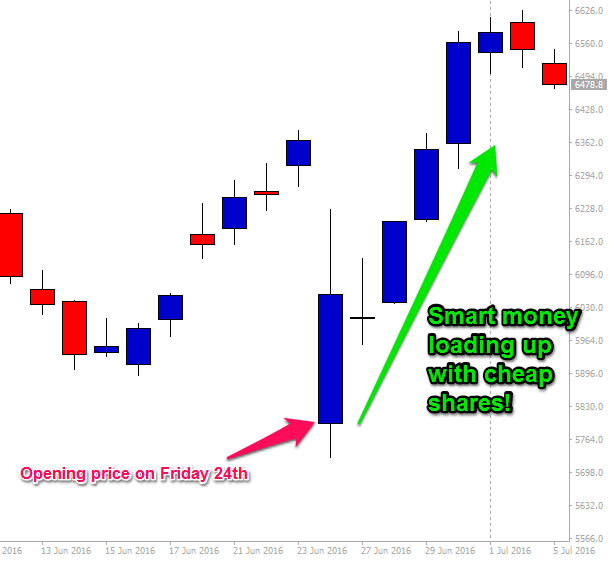 So if the movements of the FTSE100 can’t really be relied on for a true insight into the British economy what else can we look at?

Yes, there are the big market moving reports: the interest rate decisions, the Gross Domestic Product figures, the employment statistics, things like that. We already keep an eye on them on a daily basis. But it can take weeks or even months for shifts in economic health to trickle down through those stats.

But did you know there’s a whole raft of alternative indicators that market players use in an attempt to nose their way ahead of the competition?

Have you ever heard of the Lipstick indicator, or the Hemline index?

And they’re the more ‘traditional’ alternatives! The mind really begins to boggle a bit at the thought of analysts with computer programming skills trawling through social media feeds these days looking for tradeable patterns.

Some of them actually spend more time looking at Twitter feeds than trading charts. They’ll be on the lookout for correlations between trending topics – the things people are commenting about most – and movements in the financial markets.

And I can see the logic behind it. After all, market prices are only ever a combined reflection of opinions, hopes and fears. And there’s ultimately a person behind each of them.

Now the social media stuff tends to run pretty quick. The trends they pick up on can be spotted, traded, and discarded in the space of an hour or so. And the guys making it pay have some pretty serious resources behind them (think teams of traders working for hedge funds rather than us ‘lone wolfs’). So it’s interesting, but not something I’d really consider viable for myself at the moment.

But those quirky alternative ones… there’s something about them that’s just so deliciously irresistible.

If you fancy trying your hand at ‘front running’ the official economic statistics you might take a closer look at some of these.

1) Lipstick Indicator – The reasoning behind the Lipstick indicator is that women turn to less expensive indulgencies when they’re feeling the pinch. It means an uptick in lipstick sales could be an early indicator of economic hard-times. The idea was put forward by Leonard Lauder (chairman of Estee Lauder) to explain the surge in lipstick sales during the recession of the time. So if you suddenly notice the cosmetics display at Boots looking a bit sorry for itself it might be telling you conditions out on the ‘mean streets’ are getting tough!

2) Hemline Index – Economist George Taylor noticed the length of women’s skirts had a tendency to go up and down in line with the stock market, hence his ‘Hemline Index’ which first got an airing all the way back in 1926. And sure enough, he watched the short Flapper dresses worn through the roaring twenties give way to a more sombre hemline length after the crash of 1929. I suppose the great depression that followed verified his theory!

3) High-Heel Index – here’s another sign we can spot by following ladies fashion. In an economic downturn it’s been said the height of the heel on ladies shoes creeps up as consumers begin to seek escapism through more daring attire.

4) Cardboard box leading indicator – this one makes a good bit of sense… a sharp downturn in the use of cardboard points towards a coming recession as less goods are packaged and shipped. Europe’s biggest cardboard producer saw annual profits drop by 50% during the bleak conditions of 2008.

5) Men’s underwear index – just in case you were beginning to wonder if I had a bit of a thing for ladies clothes, here’s one for us men. The theory goes in tougher times men tend to make their undies last that bit longer and not buy new. I don’t know about ‘in tougher times’ they only start feeling comfortable once they’re well worn-in, don’t they? Or is that just me?

6) Unclaimed corpse indicator – this one’s a bit creepy. When families are tightening their belts would they really leave the bodies of their relatives at the morgue? They’d avoid having to pay the funeral costs but it does sound a bit extreme!

In 2009 the US city of Detroit experienced a huge increase in unclaimed bodies – right at the time national unemployment was rising by more than half a million per month.

7) Baked Beans sales indicator – watch out for consumers turning to canned goods as a sign things are getting tough. Baked beans sales increased by 23% in 2009 as people reigned in their spending on the back of the financial crisis.

8) Divorce rates – a recent study showed unhappy couples are more likely to grin and bear it during recessions. And money is the big reason why. Those divorce lawyers do know how to charge! Keep an eye out for reports of declining divorce rates and then start battening down the hatches!

9) Swiss watch exports – the bit of bling Southeast Asia’s up and coming entrepreneurs reach for first. Swiss watch export sales can be a good indicator of a healthy Asian economy. I don’t know why they bother though. I had one once. It lost ten minutes of time each week and when I went snorkeling wearing it (supposedly waterproof to 200m) I woke up the next morning to a watch-face full of rust!

11) ‘Guns Vs Caviar’ Index – despite the name, this one actually measures the global spend on military planes against private jets. It shows the balance between fear of conflict and bullish exuberance among the real movers and shakers in the world.

12) Hot waitress (and waiter!) index – have you noticed the new serving staff at your local watering hole are looking a bit too easy on the eye? The theory goes the worse the economy gets, the hotter the waitresses look. A fall-off in modeling work, or hosting at corporate events, means these bright young things seek alternative employment instead.

Interesting stuff isn’t it? We just need Metatrader to launch their ‘Hot Waitress Oscillator’ now so I can show it on my charts. Or I could always just head down to the wine bar and trade from there.

For legitimate research purposes only of course!

Care to join me?