A quick and easy daytrading signal for you to try

I’m going to share a quick and easy trading technique with you today. It’s one that’ll let you find solid trading levels on the daily charts, but then actually time your trade entries on the smaller timeframes, like the 5 minute, or even the 1 minute charts. This is a great way to identify potentially lucrative conditions from a quick glance at the charts in the evening, and you’ll always know in advance what to look for during the following day’s trading session. Why look at longer-term charts if you’re a daytrader? So, like I suggested above, this particular set-up will use solid long-term trading levels that can be identified in advance. It’ll give you a ‘floor’ or ‘ceiling’ price level from which to take your quick day trades. This kind of stuff is timeless technical analysis: what you need to keep in mind here is that we’re exploiting the way the market is always on a constant journey of ‘price-discovery’; it roams around seemingly at random but what is actually going on under the surface is a calculated and manipulated effort to flush-out as many orders as possible. The market gets drawn to an accumulation of resting orders like a magnet. A fancy way of describing this would be to say the market moves in order to encourage a release of order flow. But the phenomenon was first described to me in slightly more colourful terms… The market will try and move to places where it can, ahem, ‘mess’ things up for the most amount of people. In other words, try not to put your stop loss orders above or below obvious highs or lows, because that’s exactly where the market is going to try and reach! And because the price patterns and potential stop loss accumulations on the daily charts are much more prominent to a wider range of market participants than the intraday stuff, you can stay aware of these levels and build them into your trading plans, even if you’re looking to actually take advantage of them on a very short-term timeframe. It’s a common mistake for short-term traders to be totally focused on the smaller timescales without stepping back and looking at the bigger picture. So this is one way you can start building out your longer-term analysis to keep you ahead of the curve. The set-up: taking day trades from spike breakouts The set-up we’re bringing into play here is a retest of prominent price spikes on the daily chart. You can get these levels marked up on your chart in the evening, or early in the morning before your trading session. You’re then just waiting for the market to actually move through the level during the day (and then move back to retest it from the opposite side). When the market moves through the level you’ll often see it bounces straight off again on the retest. This is what gives you your window of opportunity to profit on short-term trades.

Here’s the simple three-step process for trading the spike retests 1) Examine the chart of your chosen markets prior to your trading session – locate any untested price spikes.

2) Draw horizontal lines at the tip of price spikes for easy reference.

3) Place limit order to fade the move back to the tip of the spike once intraday trade breaks out above or below it. They say a picture paints a thousand words so let me show you an example… We’ve spotted a spike left behind on the daily charts. It has a low of 1.3484 and could potentially be scalped or day-traded on the intraday timeframes… 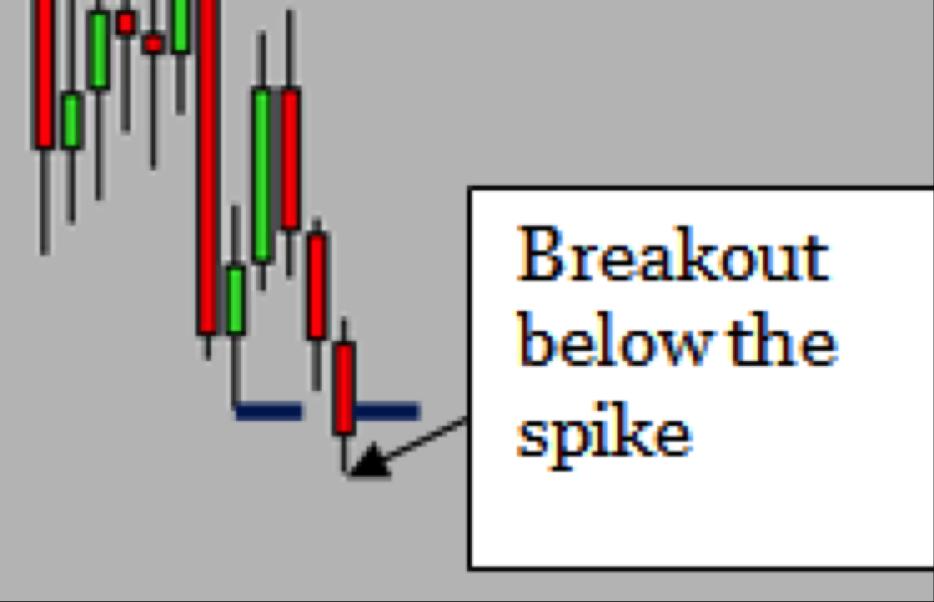 We get a breakout below the spike a couple of days later… It doesn’t look too exciting on the daily chart. That hardly seems like a significant move. But let’s have a look at the intraday action (the spike low at 1.3484 is marked by the horizontal blue line)… 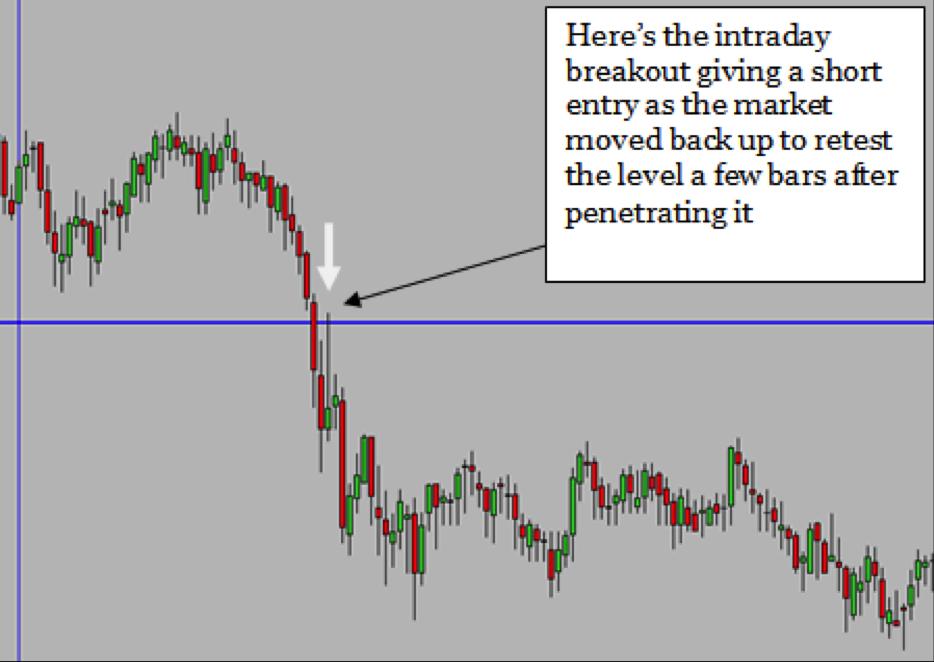 So you can see here how the initial retest gave a great opportunity to get into a short position. The market ‘bounced’ off the level, back to the downside again. A SELL LIMIT order placed just below the level – in anticipation of the retest – would have entered you into the trade. And here’s the psychology behind the set-up: Resting stop orders will be placed by those who traded the initial breakout past the tip of the spike (many of them will already have trailed their stop loss order down to the breakeven point). The market will often move back to the tip of the spike in an effort to trigger the stop loss orders that are now clustered there. Institutional traders use this kind of price action trade breakout opportunities: they’ll avoid trading the initial breakout but get in on the retest. They’ll say they are ‘fading’ the retest of the spike level. Many of the guys that sold on the first breakout of the spike are getting their stop losses hit here. They’re getting taken out of their trade at breakeven… just at the time you might be looking to first enter. Trade like the institutions and you’re almost stealing trades from the other players, picking their pockets – all in an ethical manner of course! What to do next Here’s what to do if you fancy bringing this technique into your portfolio of trading techniques: 1) Do some manual backtesting of the intraday action seen following recent breakouts above/below spike levels on the daily chart.

2) Observe how the levels hold their relevance to the market over later trading sessions.

3) Test your ideas for profit targets and stop loss sizing on these trades… you may find quick 12 or 15-pip trades work very well in liquid markets like GBPUSD.

So give my daily spike setup a test run next time you see the market threatening to breakout above or below a prominent high or low on the daily chart. You won’t find an opportunity every day, but this technique can certainly contribute a handy stream of reliable and profitable trades. Until next time… Happy trading!

P.S. If you’d like to see more psychology-driven trading methods and techniques, look out for the special email invitation coming your way this Thursday (29th October).