I first set off trying to find my own way through the trading jungle, just like you probably have.

I bought the books, followed the ‘gurus’, set about looking for the Holy Grail (you know, the one system to rule them all!)

But it was only when I stepped back and took a good long look at what I was really trying to achieve that I was able to finally take a leap forward: I pestered two pro traders to mentor me.

They were ex-pit guys at the Chicago Board of Trade. A two-man team and part of the elite crew who’d successfully make the transition from pit to computer screen.

They still traded open-outcry on busy days (they thrived off the buzz of a crowded pit) and they kept a little booth at the side of the pit so they could monitor the order flow coming in through the floor brokers.

Their style of trading was a kind of extended scalp. We weren’t going for just one or two ticks, we were holding out for four or five ticks in the Bond futures, taking advantage of buying and selling pressure coming into the market from the big players; the institutions.

They taught me how to see the market through the eyes of an institutional trader. Locating the price levels they’d be watching and then riding their shirt-tails as they ploughed into the market.

And it’s pretty simple stuff really. It’s all about finding your spot, sticking your flag in the ground and waiting for the market to come to you and pick your orders off.

It’s a strategic, logical process. Kind of like a game of chess.

You’d be figuring out where the market’s likely to be in two-move’s time instead of waiting for indicator lines to cross or any of that stuff.

But what mattered most was securing regular, consistent, daily profits.

There’d always be the odd off-day or off-week of course, that’s just reality. But it wasn’t about trying to break the bank with huge ‘glory-trades.’

Hone your skills just enough to take frequent, modest amounts from the markets and you’re all set.

All you do then is scale-up your position size enough to meet your financial goals.

And the beauty of this approach is how it’s based on the unwritten laws of how all highly-liquid markets move. So whether it’s Bonds or currencies, the skill-set is easily transferrable.

So exactly how do you step into the shoes of an institutional trader and reverse-engineer their trades?

One simple technique is to look for areas where the market has found ‘fair value’ on a previous occasion, and then look for the market to make a re-test.

The market’s an inquisitive beast. It’ll try to flush-out trading intent wherever it suspects it to lie, forcing the players to reveal their hand.

So the theory here is if the market settled around a price area previously, there’ll likely be some participants who still view it as relevant on the second coming. Chances are they’ll become active again at that price level.

Here’s the kind of thing you can look out for: 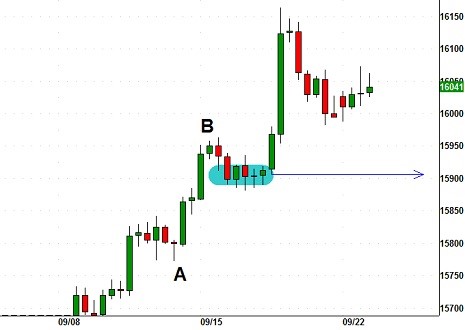 Consider the up-move from A – B. Can you see how a bit of selling pressure came in to eventually stall the move? It wasn’t enough to create a full blown reversal, but it was enough to knock the market down a peg.

We then went into a 5-bar holding pattern – the area highlighted blue. And this is what I mean by fair value. The buying and selling pressure was evenly matched over this period. The market didn’t really go anywhere.

This now becomes a price level to watch.

And if the market drops back off its recent highs, watch out for new buying pressure coming in at our level. It can them become a little area of support.

Expect renewed activity here. I’m not saying it’s going to be the reversal point that propels the market ever upwards, it might only be enough for a 10 or 20 pip scalp…

Or the bears might move things down through the level and we end up trading it as sellers – using it as a new level of overhead resistance.

But this is the kind of simple analysis that can give your trading plan a positive edge on the day.

By keeping aware of the points at which buying and selling is likely to come in you can position yourself in front of the incoming activity, and that can really put the wind in your sails!