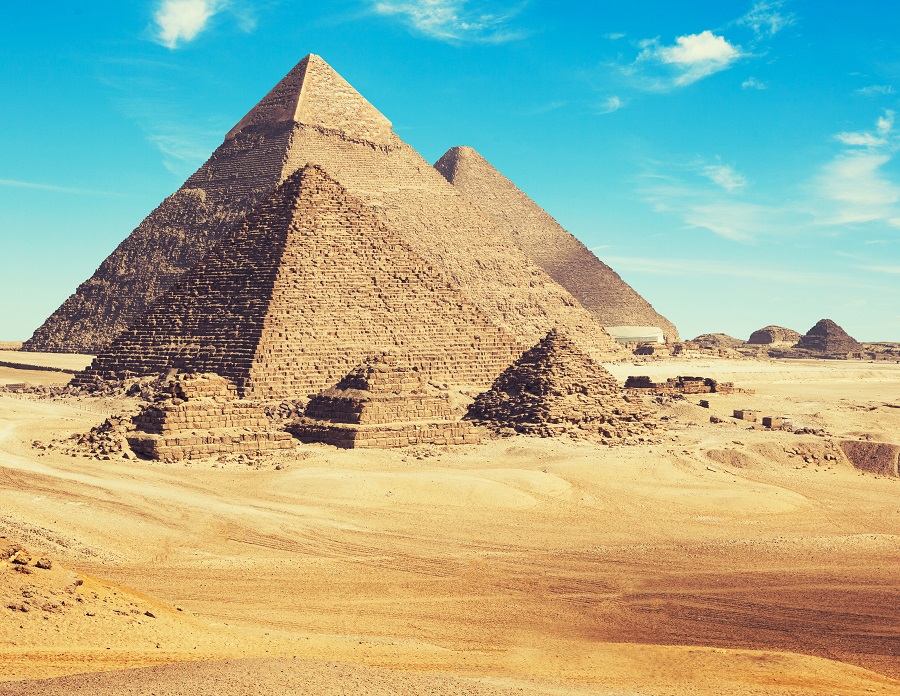 I often hear traders say things like ‘you can’t go broke by taking a profit.’

I think the key factor to consider is how much money you might be leaving behind by bailing out too early.Leave too much behind on a regular basis and you can seriously choke your results. It has been the downfall of many traders.

It can be a tough mental challenge to deal with, though. The only way to really overcome the urge to cash-in your chips is by over-riding the natural emotions you go through when your trade first begins to show good profits.

It’s only your survival instinct trying to take control. It does have your best interests in mind even if it’s a little misguided. It’s sending you an urgent message:

“You’ve found something good. Take it. Take it now, before you lose it!”

These instincts served your caveman ancestors well. Every bit of food they had the good fortune to stumble across and stash away could be the difference between life and death.

The problem is evolution has been slow to change the way our brains are wired.

And to maximise success in the markets we do need to embrace a certain degree of controlled risk.

So here are two techniques to consider…

Fair warning, though, they are not for the faint of heart.

They both stretch a trader’s comfort zone as a pathway to allowing trades to fully develop.

So if you do try them out, please make sure you don’t go risking anything over and above your personal risk limits.

Method 1: Always be in a trade

So the first thing my mentor had me do was take a one-contract position in the market – and never be flat.

I could change direction as a saw fit, for example I could be long all morning and then flip to a short position if I thought I detected a change in trend, but I could never be completely out of the position.

The exercise lasted for two weeks. I was learning to trade T-Bond futures which moved at $32.50 per tick but for this exercise he had me take a position in the Mini Dow futures which ticked at $5.00 (less risk but still with real money on the line).

And this was all about getting over the tendency to focus on trading for profit.

Sounds a bit backwards doesn’t it?

But if you focus on getting yourself in tune with the ups and downs of market price, the profit will inevitably follow.

Again, it’s one of those trading paradoxes – if you want to make money from trading, forget about making money!

Get yourself to do the right thing at the right time and the money will look after itself.

And I’ll tell you what, watching the price action develop when every little flicker on the screen makes or loses you $5.00 – especially when you know you can’t avoid it – has a way of gripping your attention like nothing else.

You start to notice little quirks and characteristics of the market because you are financially committed and fully involved.  These are things you probably wouldn’t pick up on if you were casually observing your charts with no stake invested.

(If you did want to conduct a similar exercise yourself, the micro lot Forex contracts can let you have a go for pennies per pip.)

So once we’d been through the mill with the first exercise we were relieved of the requirement to always be in the market. We could then actually choose when to enter our positions!

Method 2: Double-up instead of exiting

This second exercise helps you overcome the tendency to cut your profits short.

This time, you could choose when to get in, but when you felt the urge to exit the trade, you had to double up. You bought a second contract instead of exiting. It added to your position.

And you know what, very often the trade rolled on into super-size profits. Put yourself through that initial pain-barrier of going against your survival instinct and you’d often see four or five times the return you’d have gotten if you took the first ‘scared-money’ exit.

Now this technique of adding to a winning position can be developed further into an essential part of your trading toolkit.

It was Jesse Livermore’s secret weapon.

(He was the incredible trader characterised in Reminiscences of a Stock Operator. Also known as ‘The Boy Plunger’ for the huge positions he ran from a young age – he started trading aged 14.)

So what Livermore did was to identify a potential turning point in the market and make his first entry (a small test trade) when the market explored that price area. Imagine an upside-down pyramid. 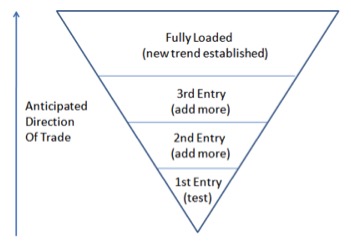 Next, if the market showed the intention to carry on moving as anticipated, he might double-up his position. In the example above, the market moved upwards proving the analysis to be correct so more contracts are added at the 2nd entry.

The market carries on upwards, more contracts added at the 3rdentry…

Until eventually the new direction of trend cannot be disputed and the full position is in place.

Don’t forget, there are already paper profits showing on the trade which provides a nice safety cushion. You might even be able to get a stop loss order working at break-even level for the whole position.

And the beauty of this technique is that you are almost never heavily positioned when a loss is taken.

You can happily let the market prove you wrong at the 1st entry stage multiple times because you know it’s only a matter of time before you are rewarded with a trade that snowballs into massive profit.

I don’t know about you, but it makes so much sense to me to scale into a position like this. It means you can take things cautiously, letting the market prove your judgment correct with hard cash.

And the profits you start racking up can then fund the purchase of your later additions to the trade. It can become a self-perpetuating position… growing exponentially at each stage.

This pryamid technique can be a total game-changer for traders struggling to get beyond the ‘breaking-even’ stage in their personal trading campaigns. Why not give it a trial run and see what you think?