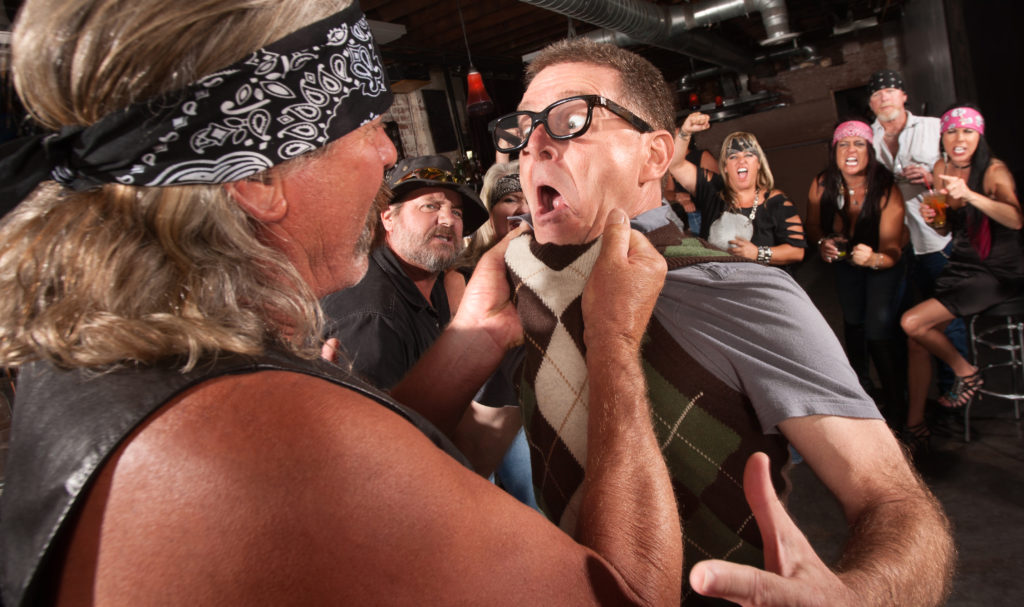 Two groups file into a room…eyeing each other they settle into private booths.

They’re about to do battle.

To the left we have the psychopaths: the hooligans, the violent serial offenders, and worse.

And to the right we have the financial traders.

To win this game of strategy they’ll make calculated decisions under extreme stress. They’ll assess probabilities on the fly and take immediate action based on their findings. It’s all about good strategy.

So who’s your money on to win – the psycho’s or the traders?

Believe it or not, this experiment happened for real at a Swiss University. The two teams played a game of “prisoner’s dilemma.”

(It’s a game where the participants can choose to betray each other or co-operate in an attempt to come out in top.)

And the surprising result showed the traders coming off second best. Their competitive attitude was their undoing. Instead of just aiming for the most points they couldn’t help but make it personal…

“It was more important to the traders to get more than their opponents. They spent a lot of energy trying to damage the opposition”.

It sounds like a classic case of ego getting in the way of performance, doesn’t it? Good strategy going out of the window as pride takes over.

So the psychopaths had no problem trampling over the others. They clawed their way to the top and didn’t care what the others were doing until the final reckoning.

So does this mean psychopaths would make good traders?

It’s a fascinating idea. Scratch away at the surface and you might find psychopathic tendencies in the top performers.

Especially when you dig a bit deeper…

Researchers at Glasgow University found psychopaths are easily bored but thrive in jobs where there’s lots of action. They’re cold, callous, and prepared to take risks. Plus, they’re happy in situations where things are always changing and they can react fast.

Hmm… the financial markets are sounding more and more like a perfect fit!

The research concluded that psychopaths are not born, but made. Peer pressure and environment can encourage psychopathic behaviour in the best of us.

So here’s the killer question:

Are potential (and actual) psychopaths attracted to the markets?

Or is it the other way around – does successful trading encourage psychopathic behaviour?

I think there’s probably an element of both.

At one time anti-social behaviour was almost encouraged at the institutions (behind the scenes it probably still is).

And traders who lose all sense of proportion are often the ones earning the most money.

It’s why traders like Jerome Kerviel end up losing their employers 4.9 billion Euros on bad futures trades. I mean, what were they doing trading that kind of size in the first place?

There’s no way the bank’s compliance department would (or should) sanction it.

And the scary thing is you only get to hear about the big trades like this that go wrong. Think how many huge positions have ended up making money for the banks instead.

It seems if the money flows into the bank’s pot all is well. Any regulatory infringements get swept under the carpet (well, unless someone blows the whistle).

First, let’s turn the equation around and look at it like this:

All you’d need to do is embrace the part of a psychopath’s personality that’ll serve you well as a trader. And just leave the bad bits out!

So here’s how to apply the psychopath’s traits for a boost to your trading success:

Ruthlessness: It’s not difficult to be ruthless when you’re trading from the screen. There’s no face-to-face interaction with people so just keep it all about making money. Avoid getting into any ego driven competition with other people. Your performance will almost certainly suffer in any attempt to ‘look good’.

Fearlessness: This is the first side of the self-discipline coin. Make sure you’re trading at a level of risk you’re comfortable with. The thought of risking money mustn’t hamper your ability to place good trades. You need to overcome fear to get a long-term profitable edge working away for you.

Impulsiveness: This is the other side of the self-discipline coin. And it’s one trait you need to dial right down. Overcome any urge to place ad-hoc trades just because the market ‘looks like’ it might go up. And don’t go looking to take revenge on the market for any losing trades!

Self-Confidence: You need confidence in your trading strategy before you can make money on a consistent basis. Make sure you have a reliable and tested system of identifying and placing high-probability trades. Confidence in your own abilities can only follow.

Focus: If you’re a day trader this might mean shutting down your email program, signing out of Facebook, and hiding your phone in a drawer for a couple of hours. Sod’s law says the perfect trade will come along exactly as you’re distracted by an amusing text message from one of your pals.

If you’re an end-of-day trader, make a daily ritual of checking your charts at a certain time. Don’t go at it willy-nilly, missing some days because you were in the pub. Make sure you design a routine that fits your lifestyle – one you know you can stick to.

Cool under Pressure: If you’re trading a system exactly as designed this is something you never need worry about. Just do what your system says and then sit on your hands. Other traders might compliment you on your ability to keep cool as the money rolls-in, but only you will know how you designed things to be this way in the first place.

Mentally Tough: This comes with experience. One of the best things I learnt as a fledgling trader was an early lesson in getting over taking losses. I took a string of deliberate losses just to get those emotions out my system as soon as possible. If you make it so you don’t care about the losing trades what’s left to worry about?

Empathy: Have no concerns about other trader’s feelings. We’re all here in the markets for the same reason. And other traders will be eager to relieve you of your money given half a chance!

But do give some thought to how your trading approach might affect those near and dear to you. Are you short tempered with your family after a bad day in the markets? Are you lost in thought of new trading system ideas when you should be enjoying a meal with your wife?

Big Tip: Make sure you know when to switch off. Take regular time away from all thoughts of trading. You’ll come back refreshed, balanced, and ready to do battle. Plus, you’re more likely to keep the full support of your family!

Conscience: A healthy conscience – the sense of doing right and wrong – is essential. It can mean the difference between using all these other traits as a fast track to success, or misusing them and ending up in prison!

So if one day you happen to find yourself trading currencies for a large European bank, don’t forget to check yourself (and your trading limits) before dropping any earth shattering orders on the market!