How a Hungarian ex-economist traded his way to a $2.2 million fortune whilst on tour with his dance troupe! (And how you might do it too!)

How was your Easter? Good I hope. I spent Sunday with the family doing the traditional egg-hunt. That is, until huge hailstones began bouncing off our heads and the children had scooped them together on the drive to make a festive Easter ‘hailman’! Bank Holiday weekend weather, eh? We scuttled inside to thaw out and I spent a lazy hour flicking through some trading books. Not the dry, technical sort, full of charts and mathematical formula. These were the ‘story’ kind; the ones full of larger than life characters and eye-popping events. There’s just something about a good story isn’t there? They seem to touch you on a very deep level. And the best ones carry a ‘Trojan Horse’: a practical lesson you can take away and put to work for your own ends. So if you liked the ‘trades from beyond the grave’ story last week, let me tell you another. Then see if YOU can apply the trading method it reveals. Nicholas Darvas: The million-dollar dancing trader Back in 1952, in a Canadian nightclub, a Hungarian dancer received a wedge of fifty-cent shares in an obscure company as payment. Two months later the same shares were trading at a dollar and ninety-two cents. They showed a profit of $8,500.00. Nicholas Darvas was hooked on trading right there and then. And he didn’t do too badly for himself either. Within seven years he’d racked up profits of over $2.2 million. And the amazing thing is he did it all part-time, whilst touring the world with his dance troupe. He didn’t have the luxury of real-time quotes or charting software. He made all his trading decisions skimming over share prices in the copies of Barron’s (a financial publication) that his broker airmailed out to him. Darvas simply phoned any instructions back to the broker. But it wasn’t all plain-sailing… After those early windfall profits he set to work developing his first ‘fool-proof system’. Needless to say, he promptly whittled his account down by five grand within 12 months! It was the usual story: overtrading, taking profits too early, refusing to take losses when reality was staring him in the face… You probably know the kind of hurdles he had to get over. It seems to be a common stage traders go through before finally things drop into place and the markets let you properly whet your beak. But anyway, back to the drawing board he went… He had a few more ups and downs but then he struck serious gold. His methods start to work Some say he was just lucky. That the bull market he jumped into couldn’t fail to make anyone rich. But the difference is he actually did it while thousands of others stood aside and watched. So what was his secret? And more importantly, can we apply it to today’s Forex markets? Well the nice thing about share trading strategies is that many of them can indeed be adapted to the four or eight-hour forex charts – we get to trade a kind of accelerated version of them. (And I’m convinced many of these famous trading names from the past would have given their right arm for access to the technically-traded currency markets we now enjoy. They probably wouldn’t have given shares a second glance!) How to trade Forex with a tweaked ‘Darvas Box’ method As he studied his books and charts Darvas realised price movement had a kind of pattern to it. He noticed when markets went into a defined up or down trend, it tended to last for some time. And within those trends, the price seemed to move in steps, or ‘boxes’ as Darvas describes them. He bought his shares when prices broke out of the top of the box, when momentum and market sentiment were strong. That was the backbone to his approach. And it’s the general concept we can steal and customise to find some high-probability forex trade entries. We’re not trying to ride the full long-term trend like Darvas did. We’re looking for more of a tailored-fit hit-and-run result. These trades are also a bit different to typical breakout entries because we wait for that little area of congestion to print once the breakout has occurred. But that’s the clever thing about it. It’s kind of a double-check safety mechanism that can filter away false breakouts. Here’s what you can look for in the case of a Long Trade (just do the opposite for Shorts)… 1. Wait for the market to take out a prominent high and then look for it to pull back near to the price level of the prominent high.

3. Go long on a break through the top of the box. NOTE: You’ll need to find a suitable technical level for your profit target (or you can simply trail your stop loss upwards as the trade develops). Here’s a nice example from the recent GBPUSD 4hr chart: 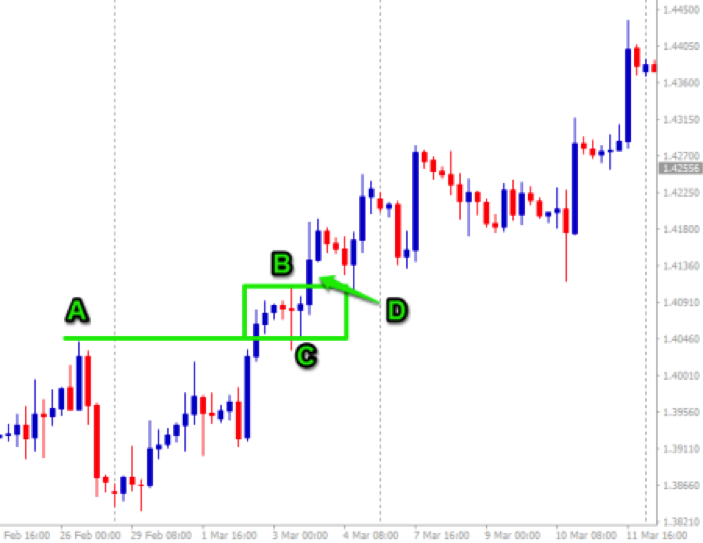 A: This is the kind of prominent high we can use as a trigger. It must be an obvious high-point to the market in general. In this case the high is 1.40419 from 26/02/16. B: This is the extreme of the breakout beyond point A. We’re still only watching the price action at this stage, remember. C: Here’s the pullback. We can now draw those lines in at B (for the top of the box) and C (for the bottom of the box). We place a Buy Stop order to go long on a break through the lid of our box. D: Here’s the entry point. We go long at D as the market moves higher again. That’s only half the story, of course. You still need to manage your exposure and you need to find a sensible level to take your profits. There were 393 pips available on this trade inside seven days. And at least 230 pips were easily captured with a simple trade-management system I run with this strategy. The initial risk would have been around 65 pips. It’s simple and effective. And if you’d be interested to read more about Nicholas Darvas and his methods, check out the two classic books he wrote:

It’s looking pretty busy on the reports front this week. Check out all that manufacturing data from around the globe on Friday, swiftly followed by US employment numbers. It should make for an interesting session to say the least!