I spent a very pleasant afternoon at the home of the 9th richest man in Britain on Sunday.

Gerald Grosvenor – Duke of Westminster – lives down the road from me. His Eaton Hall estate lies on the outskirts of Chester, which means I can just about see the Gothic clock tower from the roof of my house (I discovered this one afternoon while rooting an old bird’s nest out of a chimney).

Now it’s not like I had a private audience with the duke or anything. Anyone can go and have a good nosy round his gardens. He opens the gates 2 or 3 times a year.

And despite having to restrain my two boys from climbing the duke’s specimen trees, I did learn a valuable lesson during our visit – a lesson I think we can all benefit from when it comes to trading.

So I’m going to tell you the thing I noticed – the thing I think is the Grosvenor family’s secret of inter-generational success – and then I’m going to ask you how I can help you apply the same secret to your own trading campaigns.

So first of all, let me tell you why I think the Grosvenor family prospered when other aristocratic empires crumbled…

The dukes (past and present) seem to have a knack of finding and applying unique strategies that suit their own particular circumstances.

Let me give you an example…

Parked up in the courtyard on Sunday was a vintage Rolls Royce. Nothing too unusual with that you might think. Only this was no ordinary Roller: this was the armoured version.

And when I say armoured I don’t mean it’d been modified with bulletproof glass and reinforced bodywork to protect the VIPs riding inside – I mean it had a great big tank turret on top! 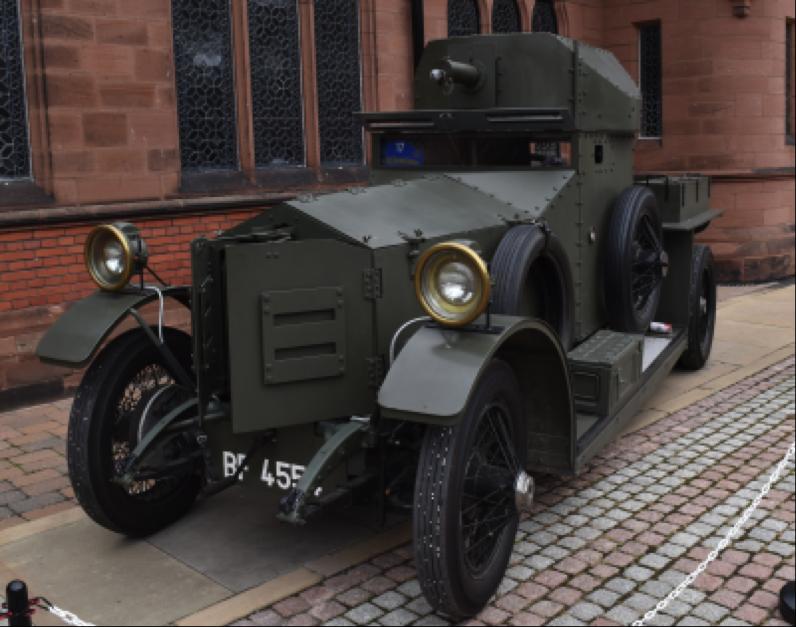 Now when the First World War broke out in 1914, it was obvious the age of fighting on horseback was coming to an end.

Henry Ford had already been churning out his Model Ts since 1908, so it didn’t take huge imagination to see mechanised infantry as the new trailblazer on the battlefield.

But who would have thought of kitting out a whole squadron of luxury Rolls Royces with armour plating and Vickers machine guns?

Someone who had both the means and the attention to detail to make it happen, that’s who.

And I know this might sound like the strange pet project of an eccentric Englishman, but I bet the crew of HMS Tara were more than delighted to see these odd cars come screeching around the corner in their hour of need…

You see, after he’d had the fleet of cars custom built, and then manned them with staff from his own country estate, the duke offered them to the Army.

The Army were not convinced (I can almost see some purple-faced general puffing on his pipe in indignation) so the squadron of cars was offered to the Navy instead.

They took up the offer and an opportunity to use them in anger came in March 1916.

The Admiralty received Information that HMS Tara had been shipwrecked by a German submarine off the north coast of Africa. The crew had been handed over to the local Senussi tribe who were holding them as prisoners of war (and not treating them too nicely).

Cue the duke (with his former chauffeur now serving as armoured car driver).

He and nine of his armoured Rolls Royce successfully extracted 91 prisoners in one carefully executed mission.

The Navy were so impressed they gave Rolls Royce the order to crank up production of the armoured cars throughout the rest of the Great War!

Now I can see what you’re thinking: ‘Well it’s alright for the stinking rich Duke of Westminster to come up with hare-brained schemes like that. But how can this help me?’

It seems such an outlandish scheme to us, but it was just another project as far as the duke was concerned. Yes, it was a grand gesture, but it was fitting for the resources he personally had at hand.

The important thing is that he was prepared to try something new, to risk failure (even ridicule) in order to achieve great things.

That’s the key lesson – he found and applied a strategy unique to his own personal circumstances.

Another notable strategy they used to retain incredible wealth…

The fourth duke died in 1967. But he’d fought in the Second World War and sustained a wound in 1944 while on active duty.

Now the thing is, if a death is caused by wounds suffered while serving in the armed forces, no inheritance tax is due on the estate.

And the executors of his estate argued that this war injury had in fact been the cause of death.
It was not a straightforward case. The defense council strongly opposed the claims. But it did eventually go through in the duke’s favour.

That must have been quite some retention of wealth when you consider his estate contained half the prestige property in London, wouldn’t you say?

I make no judgement on the action itself. Only that it was considered appropriate. And it was expertly executed in order to achieve the goals of the family at that time.

So when it comes to something like trading, it shouldn’t come as too much of a surprise if off-the-shelf strategies and systems are not always a perfect fit for you.

The times that you’d need to be at the screen may not be convenient. Or the number of trades the system finds might leave you feeling bored and frustrated. Each trader will have their own particular circumstances that need taking into consideration.

And that’s where I think I can help.

Designing and developing successful trading strategies always begins with your own particular set of circumstances in mind. And information that helps you work within your own parameters is always going to propel you to success faster than anything else.

So can you let me know what it is you need?

If you can answer a couple of quick questions it will help me deliver the most useful, most effective information especially for you. It’ll only take a minute.

When the duke wanted that special Rolls Royce building, and when he needed legal services that ensured wealth was kept within the family estate, he instructed trusted experts to deliver solutions that perfectly fitted the bill, didn’t he?

Well here’s your chance to do the same when it comes to your trading goals.

Click here and tell me exactly how I can help you…

So it’s the big one on Friday – US employment numbers!

And after recent volatility in the markets the reaction to this month’s report could have a real hair trigger on it. Please do keep an eye on the clock if you’re trading.