Two things I learned after scrapping with my mountain bike 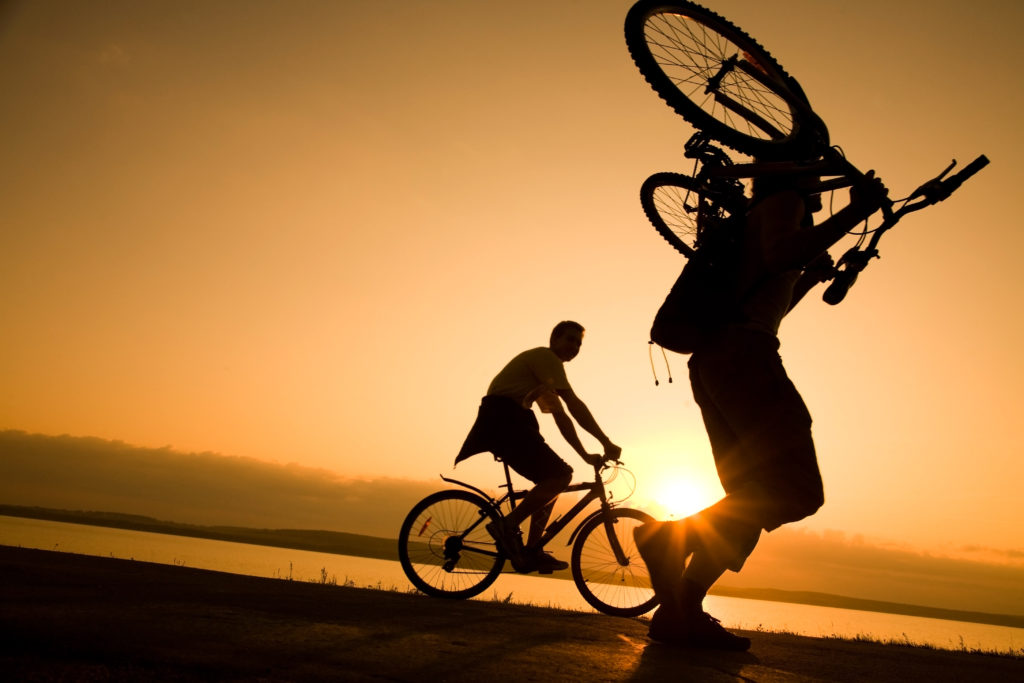 My eldest son (13) was ready for his first ‘proper’ mountain bike ride. So on Sunday we were amongst the snowy peaks of North Wales before sunrise.

But when I was getting all our bits and pieces together in the garage the previous evening I came across a box of broken bike parts.

The sight of it brought back more than a few painful memories.

And with a wry smile I thought “I’ll have to tell the newer TN readers this story.”

So here you have it, a cautionary tale from the archives…

Broken Bikes and the Power of Strategic Tea Breaks

Have you ever felt like packing it all in?

Last Sunday I came this close [holds thumb and forefinger an inch apart] to throwing the towel in and walking away.

No, no. Not from trading. Don’t worry – I’m not going anywhere as far as that’s concerned. This was all to do with my bike.

If you’ve been reading the Trader’s Nest eletter for a while you might recall me talking about mountain biking occasionally. I spent a large part of my twenties half way up rocky trails in various far flung parts of the globe, and although I absolutely love riding bikes I have a guilty secret…  I’m just not that much into maintaining them!

In fact I used to have a bit of a reputation for carrying out ‘mountainside maintenance’ half way through a ride. You know, adjusting gears or replacing brake cables – all the kinds of stuff I should have done in the garage at home that had everyone in our little gang tutting and rolling their eyes.

Anyway, I’d dragged my bike from its cobwebbed corner at the end of last summer and promised myself I would make an effort to get out and about again. My pedals had been well and truly hung-up for the best part of a decade and I wanted something on the horizon to train for, so I entered a mountain bike marathon event that’s due to be held this coming August…

“11 months. That’ll give me plenty of time to get in shape,” I thought, last September.

And things have been going great. I’ve been getting the miles under my belt on local rides a few times a week, I’ve been making the odd hop over the border into North Wales for a bit of serious off road riding, and everything had been running like clockwork with my bike.

I was just coming to the end of a glorious sunny morning ride when a strange clonking noise started coming from the suspension forks at the front of the bike. “Not to worry,” I thought. “I’ll swap them for the ones on my other bike for now and get these ones serviced”. So Saturday afternoon found me in the garage with tools in hand…

It was all going like a dream… until I picked up the tools!

I’d removed both sets of forks from the bikes and was in the process of re-fitting the good set to my main bike. All was going well until I went to fit the handlebar stem onto the top of the new fork post. It’s a metal sleeve that slides over another metal tube. It’s meant to be a tight fit, but this was really tight. So I gave it a bit of gentle persuasion with a hammer. And got it wedged tight – still an inch away from where it was supposed to be seated.

“I’ll start to tighten the top bolt. That should push the stem down into place,” I thought, and set about it with my socket wrench.

Now I appreciate all this might not make much sense unless you’re into bikes. But let’s just say that instead of admitting maybe these components weren’t designed to go together – you know, actually listening to what the bike was telling me – I thought I knew better and I was going to force it to work!

(Remember this error in thinking – we’ll be revisiting it very shortly).

Anyway, two minutes later I still had the parts stuck. Only now I had stripped the thread on the bolt too! It meant I simply couldn’t get the bits separated again without breaking something.

And I know myself well enough by now to down-tools at this stage and stop what I was doing. I made myself walk outside because I knew the chances were good I’d start hacking away out of frustration and cost myself a small fortune in damaged parts. I needed to take a breather and properly consider the options.

But after a tea break and a quick game of football with the kids I had a flash of inspiration… the car jack!

If I drilled the head off the bolt (cost of a new one: 30p), and wedged the car jack between the handlebars and the bike frame, I might just be able to gently ‘jack’ the stuck components apart without having to take a hacksaw to my bike. It would save me shelling out the £200 I was bracing myself for in replacement parts.

And I’m relieved to say it worked like a dream. But still… it was a whole afternoon wasted by being a bit pig-headed in the first place. And what’s it got to do with trading?

I was reminded of two important lessons by my workshop shenanigans.

Two things a stuck bike stem can teach you about trading:

Trying to impose your will on the market is a fool’s errand, unless you actually have the funds at hand to MAKE the markets move of course! But us mere mortals I think it’s fair to say that the market will always remain right, even when it’s ‘wrong’.

So don’t be stubborn about your trading. Accept that the market goes through different phases or ‘moods’. Be prepared to accommodate and make sure the strategy you use has a way of adjusting to current conditions. And don’t try and force an ill-fitting and mismatched approach on the market. There’s only going to be one winner in that particular tussle!

2) Take a break and stop all thoughts about trading. The other lesson to take away from my fight with the bike is that sometimes just taking a break can do you the world of good. So if a strategy isn’t performing as expected after a reasonable number of trades, or if you’re simply struggling to stick to the plan, listen to what the market is telling you. You are being given first hand feedback that shows things are out of sync somehow.

So don’t keep throwing good money after bad. Switch the screen off and break that state of frustration. Sleeping on it and coming back refreshed the next day is ideal, but if that’s not practical, at least get out into the fresh air for a bit and give your brain a bit of a rest.

Distract yourself with an activity that doesn’t need much conscious thought – mow the lawn, go for a run, practice your golf chip shots – and you might just get the flash of inspiration you need to get things back on track.

That’s when those powerful ideas tend to come, when you’re busy doing something completely unrelated, so you might as well make it something enjoyable!

I can wholeheartedly recommend cycling as your distraction of choice. But when it comes to maintenance you may well prefer to make a friend of your local bike shop owner rather than take up the tools yourself!