What’s best to do when it comes to volatility like this?

PLUS: My one top tip for day-traders looking to go full-time

It was a pretty wild ride on those US job numbers last Friday, wasn’t it? In EURUSD we had an immediate 77 pip drop… then a 123 pip rally… then another 68 pip dip… and a final 85 pip pop an hour later. It made you queasy just looking at the chart, never mind trading it! Here’s how it looked on the one-minute candlesticks: 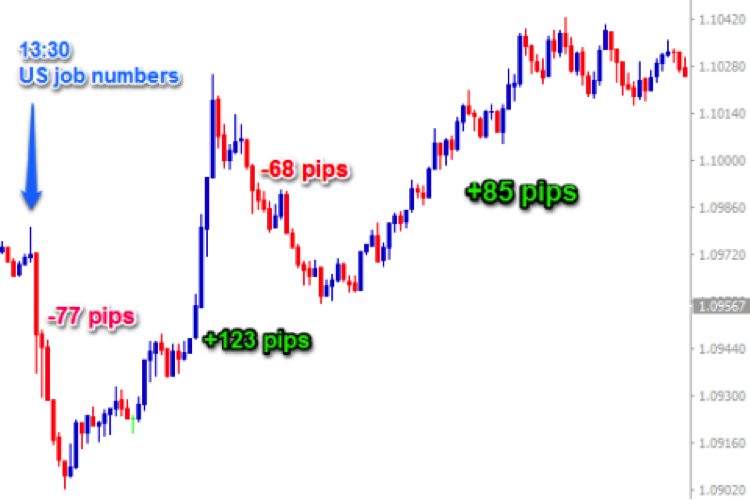 Now it’s not particularly unusual to see a ‘whipsaw’ reaction to reports like this, especially when there are so many different facets to the figures they release. In this case the headline number – the thing that everyone responds to with a kneejerk reaction – suggested massive growth in employment, but not all was as it seemed… Once the market had had chance to delve deeper into the details of the report, it was soon discovered that most of the growth was actually created by minimum wage positions. And that’s just not the flavour of job growth that implies underlying strength in the productive economy. It’s why we saw that initial US dollar strength as the report hit the wires soon give up all its gains. Anyway, I thought it was a good opportunity to answer a couple of questions I received from ‘Reader A’. Her first question addresses the economic reports specifically, and the second… well, that’s probably the big question on many traders’ lips! But more on that in a minute. Just a bit of background info: Reader A is a very short-term trader. She looks for many small ‘bite-sized’ trades throughout the session rather than trying to hold onto trades.  Here’s her first question: ‘I don’t trade around big news releases like non-farm payroll [US job numbers: usually released the first Friday of each month] because my system doesn’t seem to work very well when the market is too volatile, but sometimes that erases pretty much the entire trading day for me. In your experience which indicators work well under those kinds of conditions?’ Ok, firstly, to be upfront and honest, I just don’t tend to use indicators for short-term trading at all. I was taught to trade purely off the price action (but that’s not to say that indicators can’t be useful tools for YOU of course). Reader A doesn’t mention which particular indicators she uses, but the main drawback with most is that they lag behind the market – and this gets amplified massively on short-term charts like the 1 minute. Here’s how I see it: The markets will typically be subdued in the run-up to a numbers release so you might have an accumulation of 100+ 1 min bars printing with an average range of say 7 pips each.

Then the number gets released, and volatility instantly goes through the roof. (You’ll have seen for yourself, how things like non-farm payroll can drive prices 100+ pips in under a minute.) Now this sudden spike will totally distort things like stochastic and RSI oscillators. It’ll put them into overbought/oversold territory through brute force alone. The gaping disparity between pre-news low volatility and post-news insane volatility can blow the formula that drive the indicators apart at the seams. Moving averages and MACD are stretched beyond capacity, Bollinger bands burst wide-open…

And they’ll all be false readings! It makes indicator-based signals very tricky until things settle back down a bit. And this isn’t always a bad thing: big news days can be treacherous trading to say the least, and there’s nothing wrong with avoiding trading them altogether. If you wanted a few ideas for trading the news off price-action, you could look at scalping the reaction to the momentum moves (waiting for pull-backs and getting back in as the market flows back in the direction of the initial move). There was a nice example of a pullback to the 50% level last Friday (the 50% levels are definitely worth watching when things are really flying around)… 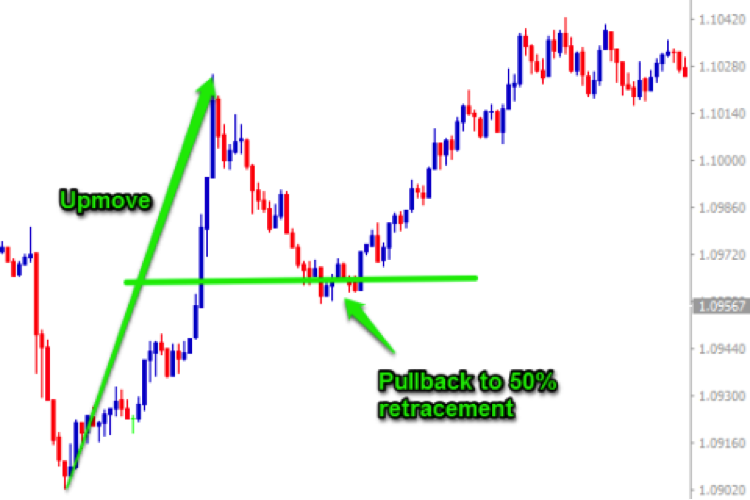 And you could identify strong support/resistance levels a way above/below current market as the news is released. You could have limit orders working and fade the market as it hits the levels for a quick scalp – the smart money holding positions as the number gets released will be looking at liquidating (at least partly) at the first strong S/R level, and the change in buy/sell pressure can give a window for your quick scalp trade to play out.

Secondly, Reader A asks: ‘In very practical terms, what’s your top tip for being able to day-trade for a living?’

My advice can be summed up in one sentence: ‘The Power of One Move’. There are a thousand and one ways to trade the markets, some are built on sound foundations and some are built on fairy dust. I would suggest exposing yourself to a handful of reputable techniques and choose just ONE set-up that feels right for you, and then concentrate on perfecting just that one move. Mastery will come by working through the mistakes and self-doubt until you get good; you then keep trading it some more until you get REALLY good; and only then go looking for other set-ups (and only do that if you really want to). But don’t make the mistake of feeling obliged to trade all day every day. If you can establish a campaign that averages just 8 or 10 pips per day, and then develop the self-discipline to scale-up your operation – staking larger amounts per pip – and stick with it, you’re up and running. And the same applies whatever timeframe you trade from. You don’t need to make massive amounts of pips per day, week, or month. It’s the monetary value of each pip that counts!

We’ve more of a global outlook than usual on the reports at the moment as the market closely monitors worldwide economic health. Keep an eye out for reactions to reports coming at odd times of the day: stuff out of China very early Thursday morning, for example. It could easily set a ball of momentum rolling as traders second-guess the implications for the wider markets too. Until next time, happy trading!